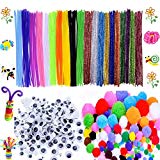 For the price, it’s pretty impressive. Although it is made of polystyrene, it seems well-engineered and well-made. Joints are tight. Lines are straight. Angles and measurements seem accurate. You can’t drop bricks on it or throw it at annoying people, but it should hold up to a lot of reasonably careful use.
The “instructions” are a joke–literally. They were clearly translated into English, but by whom, from what language, or why are a complete mystery. (Rather than tell-tale mistranslations, they are full of odd misspellings and typos.) But there isn’t much to figure out, so chuckle and move on.
The two blades are a mystery. Since they are identical, one must just be a spare. The blades are replaceable, supposedly, but there’s no clue where to buy more. (Fiskars sells similar-looking blades for a similar-looking cutter. Maybe they fit.) Maybe if you do enough cutting to eventually wear the blades out, you should be buying a sturdier unit anyway. The blades are not “rotary” despite Amazon’s classification–just pointy metal blades. The blades so have two cutting edges, so you and cut in both directions.
It won’t cut more than a few sheets at a time, and probably will not last anyone’s lifetime, but so far I like it.

This cutter looks nice, feels sturdy and the blade is sharp. I was able to cut through 8 layers of (thin) notebook paper; it struggled beyond that.

This cutter is almost entirely in metric. The grid is centimeter squares, the ruler is centimeters on both sides. (Which you can’t tell from the pictures or the description.) The only inches are going down perpendicular to the ruler / blade – you cannot measure inches anywhere else. If you want to lop of the entire side / top of a page, this will work just fine. If you want imperial measurements along the direction of the cut for, say, a partial cut of a certain length into the page, this isn’t the ideal cutter for you.

Accuracy is slightly off. I checked the grid against two separate transparent rulers, if I line up at the top, they get progressively off-center going down, so the lines on this do “drift” slightly from accurate, but I’d guesstimate it at <1%, so probably good enough for many uses in the size range this cutter is capable of. Because you don’t have a perfectly flat surface (part of the ruler is lower than the rest since it has to tuck under the base) measuring past 4 inches is tricky. It appears to be most accurate with the page following the curve of the base down to the lower portion rather than pulled taught – so you will need to be careful in the tradeoff between accuracy and bending the page.

The angles are even less accurate, but they are almost worthless anyway.. If you try to make an angled cut, the paper gets in the way of closing the ruler, so you either have to squish and wrinkle the paper or make a smaller section. If you want to cut a 45 degree isosceles triangle, the largest you can make has ~2 inch sides before your run into the ruler. (If you want to avoid the ridge that is there to help with paper alignment… you can’t.) You wouldn’t, say, be able to cut a 5″ origami square in half with this – at least not using the angle lines.

On the lack of a cutting guide. Another reviewer complains there is no guide where the blade is. It is still possible to line this up. The ruler does not block your ability to see the groove for the blade, if you line paper at each end of this, then you can position the paper exactly where you want it. Alternatively, you can measure up from the bottom of the page using the ruler (including the pull out part, see above.)

I do like they include a spare blade on this. I would recommend removing the second blade to give yourself more room and to see better for alignment. I was unable to fully cut a page while using the ridge guides along the same side as the second blade. because the second blade was just close enough that you couldn’t quite get that last bit of the page. Instructions on how to remove it are on the packaging, but you basically put the blade in the middle, flex the ruler out, and slide the blade out through the stretched-out middle of the transparent ruler. Then you have to figure out where to put it so the blade doesn’t get damaged and doesn’t damage anything else…

I also like that you have to push down on the blade to engage it, otherwise the blade does not protrude outside its plastic housing. This means that if even you run your finger along the bottom of the blade assembly, you are unlikely to cut yourself (unless, of course, you are really trying to be a dunce.)

I did plan to store this upright on a shelf, however the blade/guide tends to fall open when I set it on the flat edge, so it takes up more space than I had hoped.

The paucity of imperial units isn’t ideal; this is a U.S. customer base. Part of me wants to send this back because the description did not make it clear and there will be times I’d want the imperial along the direction of the cut or for my grid. The mathematical precise part of me dislikes the unit drift. The other part of me thinks it is probably “good enough” for many uses and there are workarounds for the lack of imperial units. I’m debating sending it back.

With a 23 month old and a 4 month old, I don’t have time to leave reviews anymore but for this paper cutter I had to. I attempted to cut by hand with scissors cardstock paper invitations for my daughters ducky themed birthday and failed miserably. Two days later here we are and I just cut all the invites and thank you cards for her upcoming birthday in minutes! Super easy, more importantly quick, and I know I’ll be using this for future invitations and Christmas cards. Awesome product! 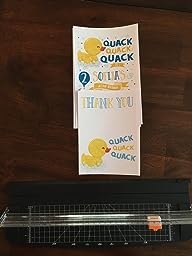